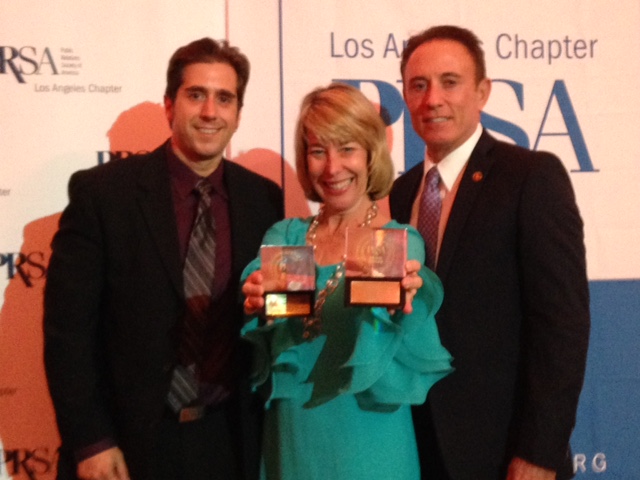 Black Ink PR CEO, Margot Black along with her SAVOR campaign partner Jeanne Sullivan and team members Tim Cravens and Jon Shawe accepted the Awards at the festivities. The evening’s program of competitors for the 2015 awards reads like a Who’s Who of the nation’s most esteemed PR agencies and respected global brand clients including Hill & Knowlton, Edelman, Weber Shandwick, FleishmanHillard, Kaiser Permanente SoCal and Blue Shield on the PR/agency side, as well as Whole Foods Market, Time Warner, The Beverly Hilton, Chevrolet and Peninsula Paris on the brand/client side.

“I am delighted to be in such a great neighborhood with many of the nation’s top PR pros and best brands gathered to celebrate outstanding work,” Margot said. “Our success is due to our dedicated team of professionals that share my passion for pushing to redefine the limits of what is possible — to exceed both ours and our clients’ expectations and ensure success. I especially want to thank my partner in crime Jeanne Sullivan who helped me raise the bar on PR for Sunset SAVOR the Central Coast and San Luis Obispo County.”

The main challenge for the Black Ink PR / SAVOR PR team was to figure out how, with limited resources, to break through the noise and generate media coverage that would attract out-of town visitors who will not only attend the event, but stay in local hotels and visit other attractions during their stay.

With the minimum enrollment hard deadline three short weeks away, BIPR adopted Valley View as its pro bono client and went to work to increase enrollment by at least 14 students (10%). In August 2014, School enrollment was a record-low 208. Through a concerted combination of social media, traditional media and grass roots organization, 14 students were added in just three weeks, crisis solved. After a year-long BIPR campaign, Valley View began 2015/16 with 245 students for a 54 percent increase, hired two additional new teachers and received numerous grants. Valley View is still a gem, but no longer undiscovered thanks to the benefit of its well-deserved positive PR.

PRSA-LA was incorporated in 1948 as one of PRSA’s first five founding chapters. Members benefit from chapter events, educational and networking opportunities, industry advocacy and a wide range of professional development resources.