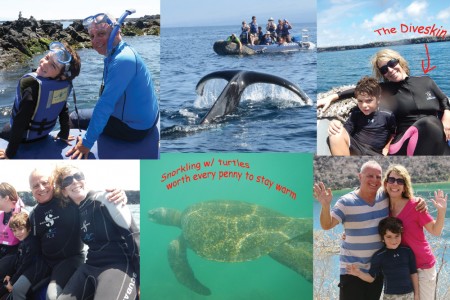 I hear this a lot: “Why do I have to interact on social media? It’s not making me any money.”

Sure, you may not be making immediate or apparent direct sales over Twitter, Facebook or any other online platform you use but that doesn’t mean you’re not setting up future sales.

You don’t know how far you can reach on social media or for how long.

Recently, before a once-in-a-lifetime trip to the Galapagos Islands with my family, I was looking to buy a snorkel skin. I’d never been in a dive shop before, let alone bought any equipment but a journalist friend told me I’d want to wear one while snorkeling under my wet suit to stay warmer longer. Since I’m the type that always seems to be chilly first, I decided it was a must have for me and I was definitely going to buy one.

I Googled the information (I had never heard of the item, but apparently 45 pages of other people had. They came in so many different sizes and shapes – ugh, how can I possibly figure this out? ) and eventually found a dive shop website, which lead me to their comments section. I had minimal time to get this sorted – while I was online I was also moderating my son’s YouTube/Minecraft use as my husband cooked dinner, so I was hugely time challenged. This was my one shot at getting this done, I had a 20-30 minute window tops, and we were leaving in less than 1 week.

On the site, from my home in Los Angeles, I saw that some lady from Minnesota had written to this dive shop owner in Florida. She was the same weight as me, same height and was also heading to the Galapagos. Her post was dated six months previously and she called herself a “tends to get cold quickly lady”. She asked the dive shop owner about the suit she was contemplating purchasing and asked if it was the right decision. The dive shop guy who answered her query was informative, polite and steered her away from her choice (it was in his shop too) but gave her a link to the suit he recommended she buy for her trip with a reason explaining his recommendation (her first choice would be too thick and she’d have trouble getting into/out of standard wetsuits, this one would give her good warmth and easy to wear and she could wear it by itself later for sun protection) I followed the same link and bought the same suit. Bingo! I’m done, informed and happy just before my husband calls, “Dinner!”

The dive shop guy had no idea that his reply would garner another sale six months later but it did. His social media sold. I chose to buy from him instead of 45 pages of other people.

This kind of interaction is just another form of networking. Think of it this way; you’re at a party, meeting new people. You don’t know if a conversation you strike up with a stranger will lead to a job in two weeks or two years. So put the notion that you “never sell anything on social media” out of your head. Forever.

The dive shop guy made a sale six months later because he replied to a nice lady with an informative email and a link. And I’m sure I’m not the only “tends to get cold quickly lady” that has followed that conversation, link and purchased.

Be the dive shop guy.

Glad I purchased the dive skin to stay in the water longer during our family vacation, it was worth every penny