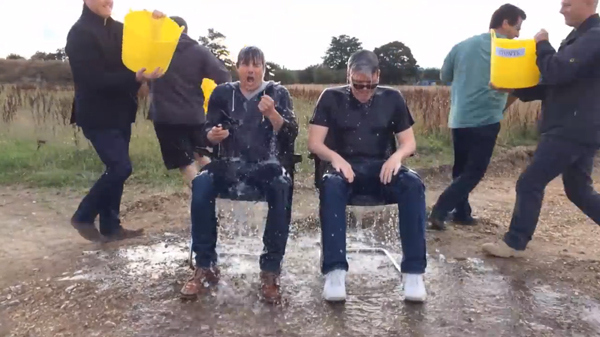 You’ve seen it and you may have even been nominated – and completed – the ALS Ice Bucket Challenge, which has been the biggest story of August, and turned a quiet month into a PR home run.

There are now thousands of entertaining YouTube clips of celebrities, sports teams, families and even one former President, on record throwing ice cold water over their heads to raise awareness for ALS, a progressive neurodegenerative disease that affects nerve cells in the brain and the spinal cord. As yet, there is no cure.

The campaign has gone viral for a charity like nothing before, and is utter genius.

Although ice bucket challenges have been around for a while it took Pete Frates, a former Boston College baseball player, who was diagnosed with ALS back in 2011 to kick off this phenomenon.

On July 31 of this year, he challenged some friends and celebrities (including NFL quarterbacks Tom Brady and Matt Ryan) to take the ice bucket challenge to “strike out ALS.”

His nominated celebrities completed the challenge, then pledged to donate $100 (or in some cases considerably more) to the cause – and crucially, nominate three other people to take the challenge within a 24 hour time period, perpetuating the campaign. The campaign went viral overnight.

The ALS Association reports that the Ice Bucket challenge has raised more than $70 million this month (compared to $2.5 million during the same period last year, July 29 to August 24). Wow. And again, WOW!

August is a notoriously quiet month and this playful challenge caught everyone’s imagination, spreading like wildfire. One day there was nothing… and the next countless videos, were popping up on Facebook and other social media.

It has brought global awareness to a painful disease that doesn’t have a Telethon, a bucket for change at Starbucks or a cute Representative. No-one really knew what it was. They do now.

The sheer simple genius is that no budget was needed.

They were not asking for money straight out but participation. By calling out others to pass it on and be inspired by the fun of it, everyone got involved – watching kids giggling as their parents got drenched, and then got soaked themselves has been beautiful and inspiring.

It’s so simple too. You don’t have to do anything: you don’t have to train for a marathon, walk ten miles in a costume, travel to a gala, find a babysitter for the night or a fancy outfit. The biggest thing you might have to do is buy a bucket but people have been using ice coolers, trash cans, plastic containers, saucepans and anything else that can hold water.

Sometimes I look at fund raisers for my kid’s school and they are asking for 20 names. I don’t know 20 people I can ask for money that will still like me after, so my heart sinks. The Ice Bucket Challenge calls out three names and is super manageable.

It also has fantastically entertaining celebrity aspect (have you ever seen so many celebrity backyards?). Amongst many others, Bill Gates, Oprah Winfrey, Steven Spielberg, President George W Bush (President Obama has donated), Jennifer Aniston, Chris Pratt, Ben Affleck, Benedict Cumberbatch, Jennifer Lopez, the Jets, the Giants, Tiger Woods, David & Victoria Beckham, LeBron James and Michael Jordan, have all taken the challenge. All naming three friends – and so publicly declaring, “I have three friends!” .

And all for zero money. Fear not thy budget!

At the Winner’s Circle we are always looking to be inspired by the people around us, and Pete Frates and the ALS Ice Bucket Challenge is a true inspiration.

So congratulations to everyone who has taken the challenge and made one man’s quest to raise awareness for his cause a global phenomenon on a budget of absolutely nothing.

We salute Pete Frates and everyone else battling this terrible disease. www.alsa.org

Welcome to The Winner’s Circle!

P.S. And sure, it seems like a challenge you can’t goof up, but just for laughs, here are a few people the ALS Ice Bucket Challenge didn’t go so well for.